Today, July 22, 2018, marked one of the most important days in the history the parish of Medjugorje.

After recently being appointed as Apostolic Visitor to Medjugorje by Pope Francis, retired Archbishop Henryk Hoser celebrated Sunday Mass at St. James Church among thousands of locals and pilgrims.

“It was unbelievable,” said Medjugorje guide and translator Miki Musa, who translated Msgr. Hoser’s homily into English which was broadcast along with other langauges. “It almost felt like a dream to see a person who came in the name of the Holy Father standing at the altar in Medjugorje.”

Fr. Miljenko introduced Msgr. Hoser at the service. “Dear Archbishop Hoser,” said Fr. Miljenko. “In this grace-filled moment, I am greeting you most sincerely on behalf of all of us gathered here! In the name of the Franciscan Province of Herzegovina, I wish you a blessed stay with us in the mission that was entrusted to you by the Holy Father, Pope Francis.” 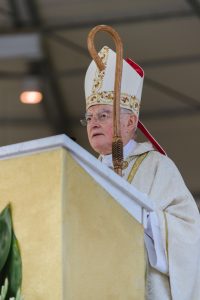 Hoser began his homily with a greeting to all the clergy, residents, and pilgrims present, and then he continued with a beautiful sermon which touched on the reasons for coming to Medjugorje as a pilgrim.

“Pilgrims come to Medjugorje from faraway regions, from approximately 80 countries of the world,” he said. “The distance, the remoteness, signifies the vastness measured by the kilometers we have passed. In order to travel these kilometers, we need to have a firm and decisive motivation, as well as a means of transportation, which are necessary to accomplish these journeys.

“But the word ‘distance’ means something else as well: it represents the existential situation of the many who have distanced themselves from God, from Christ, from their Church and from the light which gives meaning to life, directs it, and gives it a dignified goal—and that is the life worth living.

“Let us now ask the fundamental question: Why do so many people come to Medjugorje every year? The clear answer is this: they come to meet someone, to meet God, to meet Christ, to meet His Mother. And then to discover the path that leads to the joy of living in the house of the Father and of the Mother; and ultimately to discover the Marian way as the more certain and sure one. This is the path of the Marian devotion that has been taking place here for years.”

Later in his homily, Msgr. Hoser said, “This is what the people’s devotion in Medjugorje looks like: in the center is the Holy Mass, Adoration of the Most Blessed Sacrament, the sacrament of Reconciliation. And all of this followed by other forms of devotion: the Rosary and the Way of the Cross, which have turned what in the beginning used to be sharp stones into smooth paths.”

“In my opinion, said Musa, “this is the greatest event to take place in Medjugorje in the past 37 years, after June 24, 1981 when the apparitions first began. We are all so grateful. I had to stop my translation for a moment and take a deep breath. He said such powerful words.”

Musa added that during the entrance song for the Mass, he believes he saw the Papal Nuncio singing the local hymn “Our Lady of Medjugorje” in Croatian.

We will post the full translation of the homily soon. Scroll down for more photos of today’s Mass. 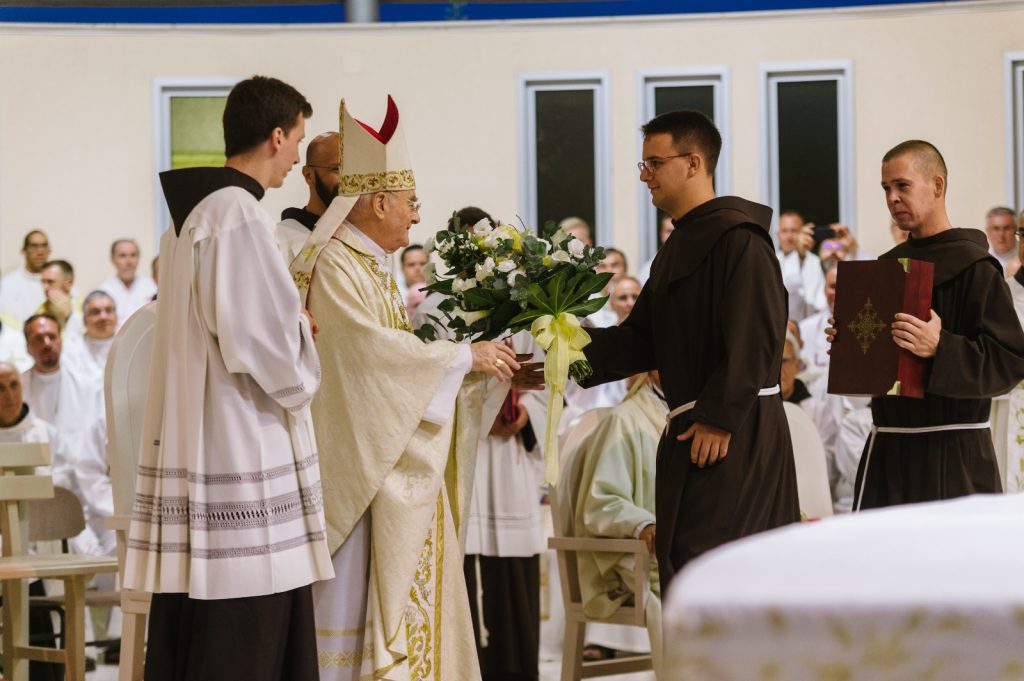 To the Venerable Brother

As the continuation of the task of the Special Envoy of the Holy See for the parish of Medjugorje, which You recently accomplished, and in the desire to express the particular pastoral care that this reality requires, I appoint Your Excellency as Apostolic Visitor with a special role for the parish of Međugorje for an indefinite period, ad nutum Sanctae Sedis, with the authority, obligations and in accordance with the modalities specified in the Mandate attached to this Document.

Convinced that You will know how efficiently to carry out the entrusted task in the spirit of positive cooperation with all the interested parties, I assure you of my prayers and with heart I impart you the Apostolic Blessing.

In Vatican, May 31st 2018, the Solemnity of the Most Holy Body and Blood of Christ.